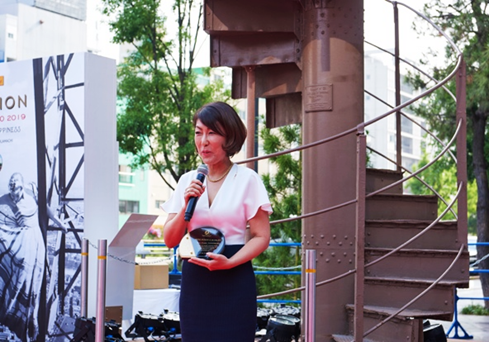 On June 20th of 2019, Femmes du Monde held an event entitled "Rising Women" at the foot of the Tokyo SkyTree Tower with Ninapharm Japan: presenting the original staircase of the Eiffel Tower celebrating both the 130 years of the great lady in Paris and a new era for women entrepreneurs from all walks of life. This event was broadcasted on Japanese television and in the presence of Royal Highness from Bhutan Ashi Pema Lhadon Pem Pem Wangchuck, Ms. Etusko Tsugihara, CEO of the Sunny Side Up( super entrepreneur woman from the age of 17th) , Mr. Yamamoto (Mayor of Sumida district) as well as delegations from Sumida district and the city of Tokyo.

The highlight of the event was the moment when the princess Pema took the Infiniti spiral stairs with Ms Tsugihara to symbolize of happiness and business hand in hand togather is possible.

Bhutan is the happiest country in the world thanks to its royal family leadership of putting the happiness of people first and create worlds first Gross National Happiness-GNH.

During the event the team of Femmes du Monde offered the « woman of the year « award to her  Her Majesty The Royal Grandmother of Bhutan Ashi Kesang Choden Wangchuck to bring awareness of her contributions to humanity and support for thousands of women with Femmes du monde projects.

Get in Touch with Us